Rowlinsons Name Charity Of The Year for 2019 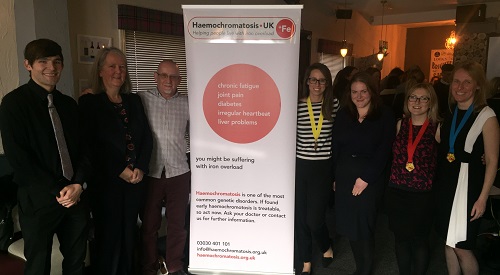 The charity supports people affected by genetic haemochromatosis (GH), which is a genetic disorder that causes the body to absorb an excessive amount of iron from their diet, building up to toxic levels. This ‘iron overload’ is potentially very damaging and symptoms can include arthritis, liver disorders, diabetes and chronic fatigue.

Haemochromatosis UK provide support and information services to patients and their families and are the only organisation in the UK specifically working for this group. The charity works to raise awareness of GH with healthcare professionals, in an effort to improve the speed of diagnosis and support various research initiatives into the condition.

“We have chosen to support Haemochromatosis UK this year because two of our members of staff have been diagnosed with the condition in the past 12 months, and we have all been surprised at the apparent lack of public awareness of what is a relatively common condition.

We put a shortlist of three charities to a staff vote to be our charity of the year for 2019 and Haemochromatosis UK received overwhelming support.  We will be aiming to support the charity throughout 2019 not only by raising funds, but also helping to raise awareness of this condition.”

"When we heard that two staff members at Rowlinsons both have GH, it just re-iterated how common the condition is, yet just how little is known about it. We are pleased to have been chosen as the charity of the year for Rowlinsons, and are looking forward to working with them to raise awareness of genetic haemochromatosis.

I'm sure we can have some fun along the way as I know there are some great events planned by the Rowlinsons team, including a hike up Snowdon, plenty of cake sales and a 5-a-side football tournament."

We use a range of cookies to improve your experience of our site. Find out more.